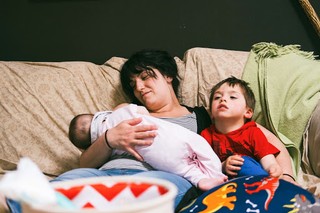 Opioid Overdose Deaths Go Up for New Moms after Childbirth. Here’s Why.

LOUIS — Sally Diullius was a grad student working as a therapist at a drug treatment center when she used heroin for the first time. Her boyfriend, a patient at her clinic, had left a dose at her house when she decided to try it.

“How do people throw away everything, their family and relationships, for this drug?” she asked herself as her curiosity got the best of her.

Nine years later, after countless attempts at detox, a couple stints in both inpatient and outpatient rehab, and the birth of her son, Emerson, Diullius is four years sober and has another child, 10-month-old daughter Wren.
The secret to Diullius’s recovery and consistent sobriety has been access to the medication-assisted treatment methadone, thanks to a Medicaid loophole that guarantees coverage for recovery medications just for pregnant women. But after her second pregnancy, Diullius was in for a bit of a shock: Her recovery coverage would expire 60 days after the birth of her daughter, so shed have to foot the $537-a-month methadone bill herself.

“Unfortunately it’s easier in the state of Missouri and in the streets of St. Louis to find illegal substances than it is to find someone will prescribe methadone,” said Diullius. “No one would take me unless I relapsed...so I can relapse and throw away multiple years of recovery to get help, but no one wants to help me where I’m at, and I feel like the more time you have clean and the more you assimilate and get a job, pay your bills, there’s just not help.”

Sally Diullius, who is nine years sober after an addiction to heroin, with her two children Wren, at six months old, and Emerson, 4, at their home in Black Jack, Missouri, on April 14, 2019. (Cassandra Giraldo/Vice News)
While the opioid epidemic has impacted Americans of all ages and backgrounds, pregnant women and new moms have become particularly vulnerable. According to the Centers for Disease Control and Prevention, the number of pregnant women with an opioid addiction more than quadrupled in the 15 years the opioid crisis was at its height, between 1999 and 2014.

In recent years, a shift in recovery focus turned to pregnancy and babies suffering from neonatal abstinence syndrome, but even more recently, states are recognizing that mothers have been cut out of the picture.
Few realize that opioid overdose deaths actually decline during pregnancy as women are motivated to keep their babies healthy. Studies now show that overdose deaths peak in whats now known as the “fourth trimester”— a period lasting at least a year after childbirth, the deadliest period for addicted women. It’s in those months that access to medical care and social services disappear and women become more vulnerable to relapse and overdose.

In the U.S., where most states take a punitive approach to mothers with a history of substance abuse, the Substance Abuse and Mental Health Services Administration (SAMSHA) reports that fewer than a quarter of the nation’s substance abuse treatment centers offer services tailored to pregnant or postpartum women. Of those centers, a fraction offer recovery drugs, buprenorphine or methadone, to reduce cravings and withdrawal symptoms.

Sally Diullius’ daughter Wren at six-months-old on April 14, 2019. Wren was born healthy with no signs of withdrawal or complications. (Cassandra Giraldo/Vice News).
America’s siloed healthcare system and each state’s Medicaid policies complicate matters further. In the 17 states that have not expanded Medicaid to low-income adults, for example, coverage for pregnant women expires 60 days after childbirth.

Missouri almost became the exception this past year. The non-Medicaid-expanded state was the first to pass a bipartisan law, House Bill 2280, to extend coverage for women with a history of substance abuse to one year after childbirth.

The law is dependent on a waiver between the Missouri Department of Health and the Center for Medicaid Services that allows the federal government to grant states flexibility with their Medicaid program. The law was to go into effect Aug. 28, 2018, but now one year later, implementation is at a standstill as the waiver draft awaits evaluation.
“One of the downsides of being the first in the country to do something like this was the fact that were the first in the country to do something like this,” said Cora Faith Walker, the former state representative of North St. Louis County who sponsored the bill. “I certainly understand that implementation doesn’t need to be rushed; it needs to be done right. But there are women who are going without right now while we’re in the process of doing this.”

Single mother Erica Slaughter with her four-month-old son, Jasyiah, at her home in downtown St. Louis on Aug. 4, 2019. (Cassandra Giraldo/Vice News.)
With or without the new law, St. Louis County has been able to work around the state’s limitations, becoming the epicenter for treatment access for pregnant women. The Queen of Peace Center, a behavior healthcare center and shelter for women and families and the Women and Infant Substance Help Center, or WISH Center, a prenatal clinic run out of SSM Health St Mary’s Hospital that specializes in addiction treatment and relapse prevention services, serve women from all over the state and neighboring Illinois.

Maternal-fetal medicine specialist and WISH medical director Dr. Jaye Shyken is at the helm of this crisis among women in Missouri. Five days a week, she runs a full-time operation dealing exclusively with pregnant women, new moms and newborns enduring the symptoms of a history of opioid addiction.

“When somebody is pregnant, they’re getting a lot of medical care and they have close contact with their addiction-medicine provider,” said Shyken. “The shift then focuses after they deliver toward the baby. They’re seen less frequently and then if their Medicaid runs out it is just a period of time where they also don’t have their addiction medication and they’re at risk for relapse. That is the crisis.”
Through grants, she’s been able to work around Medicaid limitations, following up with patients two years after childbirth. Shes also one of the few providers in the state who is licensed to subscribe Subutex, a form of buprenorphine that helps women abate their addiction during pregnancy.

Erica Slaughter with her kids (from left) Anton, 15, Tremayne, 11, Destiny, 17, and her newborn Jasyiah at their home in St. Louis on August 4, 2019. (Cassandra Giraldo/Vice News).
Without the support of both Queen of Peace Center and the WISH Clinic, single mother Erica Slaughter didn’t think her fourth pregnancy, with son Jasyiah who was born in April, was going to work out.

“I wasn’t really excited to find out I was pregnant. It was like a scary feeling,” said Slaughter. “I was very depressed and stressed out. I realized that I needed to start getting clean because he was still growing and he was trying to exit no time soon, so I ended up telling the nurse that I had a problem and I had an addiction to heroin and I ended up getting a prescription from the doctor for Subutex.”

Slaughter’s recovery, like so many others on the road to recovery, hasn’t been perfect. High stress toward the end of her pregnancy led to relapse just hours before the birth of her son. Jasyiah was born without withdrawal symptoms and through the social supports of Queen of Peace and WISH, she was able to bounce back from her relapse. Now four months into postpartum, Slaughter is taking her recovery into her own hands, hoping that the services she’s been able to rely on during pregnancy will still be available to her.
“The purpose of treatment is not more treatment, the purpose of treatment is to have women thrive,” said Shyken. “And if you can bring them to the point where they’re thriving it’s just a shame to shoot them in the foot and deny [women] coverage for the medication that’s helped them achieve that.”

This segment originally aired Sept. 3, 2019 on VICE News Tonight on HBO. Cassandra produced this story as a Reveal Investigative Fellow. The fellowship, supported by the W.K. Kellogg Foundation and Democracy Fund, provides journalists of color support and training to create investigative reporting projects in partnership with their news outlets.

Billie Eilish Stuns Grammys With Moody 'When The Party's Over' Rendition

Tyler, The Creator Gave Us the "Earfquake" Remix We Needed at the Grammys