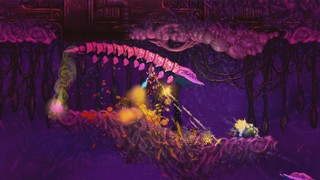 ‘Valfaris’ Is the Badass Baby of Iron Maiden and Contra. It Rules.

My immediate reaction to yesterday’s announcement that DOOM Eternal was being delayed until March 2020? Relief, honestly.

We live in an era where it’s increasingly impossible to keep up with the pace game releases, no matter how much time you dedicate. You have to make peace with the idea that lots of games, many excellent, are destined to pass you by.

Which is what makes this proclamation all the more important: do not let Valfaris pass by.
Valfaris, an action game where the main character pauses to headbang every time they find a weapon, is what might happen if an Iron Maiden album came to life in the form of a new Contra game. If the Iron Maiden reference doesn’t land, try this: Warhammer 40K X Contra. The mashup is exactly as ridiculous as you might expect, and exactly as fun as you’d hope.
(Side note: How strange that Konami seems hapless to reinvent Contra, while games like Valfaris and Blazing Chrome, both from indie outfits, provide what fans have asked for.)

First things first, because the trailers released so far seem to be giving people the wrong impression: Valfaris is not a Metroid-like. There are secrets, yes, but this a linear action experience, thus the more apt Contra comparison. Valfaris is always pushing forward to the next gross monster, the next absurd weapon. You don’t spend time revisiting old areas—in fact, I actually wish it was easier to do so! Too often, Valfaris nudges the player forward, locking them out of what came before, preventing you from poking around for hidden walls.

But more importantly, it feels good as hell to play. Valfaris is an excellent action game, a game whose exaggerated aesthetic feels in concert with its equally exaggerated gameplay.

You have three modes of attack in Valfaris initially: short-range sword, long-range pistol and powerful medium-range special weapon that pulls from the same energy powering a shield. Your weaponry expands considerably as the game goes along, whether through upgrades (the pistol goes from a single shot to a triple shot with multiple angles), or new methods of destruction (a missile launcher that chews through energy like nobody’s business but also locks on if fired somewhat in the proximity of an enemy). It’s a game less about discovering a loadout that suits a moment or a particular enemy weakness, and more about sorting through the vast assortment of options and finding a combination that’s effective and badass.
I’ve so far settled on this potent combination: the short but gnarly “Blood Axe” to thrash anything that dares come close, the aforementioned missile launcher (lovingly dubbed the “Envoy of Destruction”) that lets me hop around while my small children automatically find a quick but deadly path to baddies, and the boring but effective Plasma Pistol. The game keeps dumping new weapons on you at a fast enough pace that you’re likely to be switching up what feels “right” every 30 minutes or so. The bigger question will be where you spend the game’s precious upgrade materials, which are largely held behind those secret walls.

It’s a game that just keeps moving, making it impossible to get bored. There’s barely time to process what ridiculous thing happened, because you’re onto the next grotesque spectacle, whether it’s taking control of a mech with a skull for a face or tearing apart a massive bug and drenching yourself in its blood, so you can pass to the next area. Straight up, I don’t have much clarity on why I’m doing these things in Valfaris, but I confidently do not care.
It is hard, but no tougher than your standard Contra game. Valfaris doesn’t demand pixel-perfect play, but there’s no way to roll through by holding down “fire,” either. It’s a satisfying balance, even for someone who has no problem with a game kicking me around. Your frequent deaths feel in line with a world as hostile as the one you’re blasting through.
When I watched a trailer for Valfaris, a game where one weapon is described as shooting an “incessant hail of powerful, tormented souls,” I kept wondering: Where have I seen a game like this before? On one hand, Valfrais looks like someone took Abuse, absolutely one of my favorite PC action games from the 90s, and dragged its aesthetic to 2019. On the other, Valfaris felt more recent than that. Turns out that’s true; Valfaris is the new game from the same studio behind Slain, a game with a similar heavy metal leanings but way more goth-y.

At launch in 2016, Slain was not good. I gave it a shot, found little to like beyond the tremendous pixels, and bounced. Most of the world seemed to feel that way, including the game’s developer; they went back and reworked it from the ground up, later re-releasing it as Slain: Back From Hell. People seemed to dig the update, but I never got around to it.

In booting up Valfaris, I feared a similar problem: a feast for the eyeballs and little else. How delightful, then, to find out Valfaris is much more than that. Valfaris, friends, absolutely slaps.
Valfarisis available tomorrow on Xbox One, PlayStation 4, PC, and Switch. I, naturally, played it on Switch, where it ran and played just fine.

Exclusive Poll: 80% of Young Voters Think ‘Global Warming Is a Major Threat to Life as We Know It’

Era of mega-funded, money-losing unicorn start-ups is coming to an end